1. What is being requested?

The ballot question asks to increase the current 9-1-1 surcharge you already pay for phone service in Kent County. An additional $0.70/month per line for a total of $1.15/month would address 9-1-1 Dispatch technology improvements and fire dispatch operations. Residents with one phone would pay approximately $13.80 a year per phone.
*See question 8 if you have more than 10 phone lines. 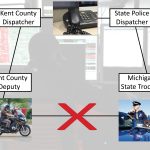 911 dispatch in Kent County operates on eight different radio systems, all of which cannot directly communicate with each other. Often during emergency situations, first responders (police, deputies, firefighters and emergency medical technicians) from different agencies can’t communicate directly with each other, even though they are all responding to the same call for help. Some first responders carry multiple devices in order to talk to various responding agencies. This has led to lapses in communication, especially if information is transmitted on a wrong device. In addition, Kent County and City of Grand Rapids dispatchers can’t communicate via radio with dispatchers or first responders on the 800 MHz Michigan Public Safety Communications System. This includes Michigan State Police, Ottawa County, Allegan County, Ionia County, and Newaygo County. In incidents involving these agencies, our dispatchers use telephones to communicate with other dispatch agencies, who must then relay the message to their first responders, which takes more time to complete.

3. What will the surcharge be used for?

Public Safety Dispatch. Kent County would purchase communications towers and 800 MHz equipment which would put all dispatchers and First responders in the County on the Michigan Public Safety Communications System. This eliminates the need for multiple radio systems. Part of the surcharge will cover costs associated with countywide fire dispatch, which is more complex technologically and more labor intensive than in the past. Most of the cities and townships in Kent County adopted resolutions urging the County place a surcharge question on a ballot in 2016.

4. What other funding options are there?

Some communities levy a property tax millage, but after study, the Board of Commissioners determined that a surcharge would be more appropriate for Kent County because it is more of a “user-based” fee, directly charging devices that use 9-1-1 service.

5. How does this surcharge request compare to what other counties are doing?

Even with a surcharge increase, County residents will continue to pay on the low end for dispatch services compared to other, like-sized counties within the State. Below is a cost per capita comparison of Kent County with other counties looking at the existing $0.45 surcharge and after the proposed $0.70 surcharge increase.

View full listing of county surcharges and millages for 9-1-1 Dispatch.

6. How are other counties paying for their dispatch operations?

7. Don’t I already pay a surcharge on my phone bill?

A $0.45 surcharge was put in place in 2008. This provides approximately $3 million a year to the Kent County Dispatch Authority, and covers a portion of operating costs for the Kent County and City of Grand Rapids’ dispatch centers. Technological and operational demands for dispatch and emergency communication among first responders, have continued to grow over this time, but the County’s $0.45 surcharge has remained the same. The current $0.45 surcharge is not sufficient to pay for the upgraded technology and increased operational demands that come with a growing population.

8. What if my home or business has multiple phones or lines?

Every phone number will be assessed. For landline users with multiple lines (such as a business), the surcharge is only assessed on the first ten lines individually, and then for every ten lines (or portion thereof) owned thereafter. For example, if a business owns 100 phone lines, the surcharge is (and would be) assessed based on 19 phone lines (the first 10 lines are counted, leaving 90 lines remaining; 90 divided by 10 = 9 lines; 9+10 = 19 total lines assessed).